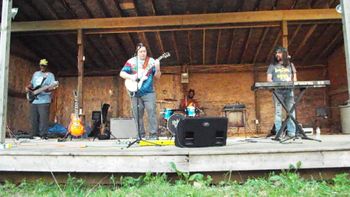 Rubix Wheel is a Power Jam Trio from Columbus, Ohio.  With skilled and experienced players, they don't shy away from Improvisation.  And their catalog of music has reached millions of listeners.  Songs like Oneness have over 42,000 plays on Spotify.  And other songs are streamed all over the World.  Rubix delivers a high energy show with a different set list every night.  They combine Acoustic Rock Originals with Electric Jam Originals, making them stand out from the crowd.  Book them today for your Venue or Festival.  They will not disappoint.

"The song “Feels” opens the record with that tasty old school and true jam band flavor. The guitar is plucky and soaring while the bass holds a steady and deliciously thick groove. I like the way the drums and keys get laced through each song on this album."  The Jamwich

''Feels' is the kind of friendly rocker that requires serious instrumental expertise to attempt - and its still rare to encounter an act that can turn such transcendent skills into a radio-ready hit like this." ​ The Akademia  - Los Angeles, CA

"The band crackles with intensity and a tight groove formed from a few years on the road." Independent Music Reviews

"Rubix incorporates classic rock songs with their originals, making them a hybrid band that can play all kinds of venues."  Jamsphere Magazine

"This is a solid rock-based band with flashes of poppy, funky, dreamy and  jazzy overtones and influences. If you are into jam bands, or alternative rock, then this band is for you."  Jamsphere Magazine